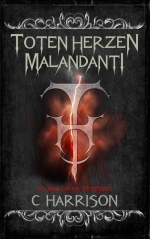 Available for Kindle, Apple, Kobo, Nook, other ebooks and in paperback

The second book of the Totenseries follows the band’s return to the studio to record their first album since 1977. Hoping for privacy, the band endure litigation, Rob Wallet’s increasing madness and a powerful coven of witches from Bamberg looking for a book owned by lead singer Dee Vincent.

“I do not skulk around in corners. I’m strictly a middle of the room kind of guy.”

After the disastrous events in the previous novel ‘We Are Toten Herzen,’ the band are forced to count the costs and the repercussions of their comeback tour. The focus turns to the safety of the recording studio and their first album in forty years. Things can’t get any worse.

But this is Toten Herzen, the dead rock band: murdered in 1977, discovered alive in 2013. Guitarist Susan Bekker wants to sing, antagonising lead singer Dee Vincent whose catastrophic interview in Hullaballoo magazine leads to a multi-million dollar lawsuit. Rob Wallet, the band’s publicist, flirts with insanity when he isn’t flirting with Lena, the seductive former terrorist and leader of a network of covens known as the Malandanti.

The story sets down amongst the isolated mountains of the English Lake District, with excursions to post-communist St. Petersburg and Bamberg in Germany, scene of the 17th century witch trials. Along the way the band are assaulted by an ever growing list of mysteries. Why has a Russian voice coach arrived uninvited at three in the morning? Why are the Malandanti searching for a book owned by Dee Vincent? What is Susan Bekker’s Big Lie? And is the valley pictured in a 14th century painting the source and home of the first European vampires?

Walking alone in the shadow of Pendle Hill in Lancashire has an effect on you. Looming over Pendle witch country, its bulk and broodiness must have played a role in the suspicion and fear that led to the Pendle witch trials of the 17th Century.

It was during one such walk that I told myself I had to write about witchcraft, old school witchcraft with broomsticks and cackling. From this draughty stroll the first ideas for the second Toten Herzen novel began to form.

But being an international project I decided not to adopt the Lancastrian witchcraft, but head over to the nasty epicentre of the Inquisition: Bamberg, where over a thirty year period thousands perished in a prolongued succession of witch trials.

Bringing together two traditions of folklore, the vampire and black magic, offered a rich source of episodes and confrontations, but again the nod to European tradition became the vehicle for a contemporary story set in Bamberg, St. Petersburg and the English Lake District, an area I’ve longed to write about.

Toten Herzen Malandanti was also more personal than We Are Toten Herzen, with Rob Wallet’s story arc coming perilously close to being autobiographical. We’re the same age, would you believe, so it was bound to happen.

However, the big positive that came out of this novel was the creation of the Malandanti. I didn’t invent the word; Malandanti were evil spirits in the Friuli region of 16th Century Italy, but when the novel was finished I knew I was in possession of a concept rich in possibilities . . . and the Toten Series became something much bigger than I originally intended.